The knockout bomb from the Feed and Grain Exchange

was featured as merciful, quick at the bone

and the case we had against them was airtight,

both exits had a sub-sub basement out of range.

Next morning they turned up again, no worse

for the cyanide than we for our cigarettes

and state-store Scotch, all of us up to scratch.

They brought down the marigolds as a matter of course

and then took over the vegetable patch

The food from our mouths, I said, righteously thrilling

I, a lapsed pacifist fallen from grace

puffed with Darwinian pieties for killing,

Now drew a bead on the littles woodchuck’s face.

He died down in the everbearing roses.

Ten minutes later I dropped I dropped the mother. She

flipflopped in the air and fell, her needle teeth

still hooked in a leaf of early Swiss chard.

Another baby next. O one-two-three

the murderer inside me rose up hard,

All night I hunt his humped-up form. I dream

I sight along the barrel in my sleep.

If only they’d all consented to die unseen

The Gardener is trying to remove the wood chucks by using the poison. she uses in the beginning fails. The Gardener thought pacifying the woodchucks through the sedation of a merciful sleep of death after being assured it would work. This failed for the Woodchucks hide in rebellion underground much like the Jews who went into hiding during the holocaust. This metaphor for the fact that no matter what in society, there will always be those that they deem “Undesirable” despite their innocence and minor transgressions. As the Tyrant and their army of what Hannah Arendt would describe as the ‘Banality of Evil’, the caricature of which are those who blindly follow orders to carry out caustic brutality against the Undesirables. Such as, the Jews in Nazi Germany, the Intellectuals under Stalinist USSR and Maoist PRC. Everything in the garden is a representative of society in how these innocent Undesirables are perceived to ruin the society they inhabit despite there being no major offense. The Tyrant and their Mindless Loyalists who follow orders blindly in obedience view these innocent Undesirables as a menacing threat needing to be eradicated for merely doing what they do in existence bearing no major offense. Most tyrants, fascists, and dictators rise to power through promises of altruism and by bread to the poor. The Gardener of Society has become Hunter, they have become death the destroyer of the worlds of the Undesirables of their society being the Garden. The Hunter is a merciless killer willing to even kill children and the young of the undesirable pariahs of society in soulless callous brutality. The Hunter admits to have become death “a lapsed pacifist fallen from grace” the ability that even good people can do horrendous things if given authority by tyrants over the lesser undesirable pariah of society. This is reinforced by the ‘Stanford Prison Experiment’ and ‘Lucifer Effect’ as shown by the Sociologist Philip Zimbardo. The statement “puffed with Darwinian Pieties for Killing” alludes to how authority over the lesser undesirable as subhuman is reinforced by the reference for Nazis in the Third Reich for their ‘Universal Solution’ in their scheme to wipe out the innocent Jewish and innocent Undesirables as the Hunter transformed into the Tyrant feels the Woodchucks are lesser forms of life and hunts them down indiscriminately with impunity in their Garden, a metaphor for Society. As those who aid and abide in the inhumane crimes against all that society deems undesirable. The Hunter as the most evil of obedience to Tyrants has lost their humanity in cleansing their society in the Tyrant and the Hunter in their Garden. Humanity is lost, monstrosity is found. The old wily fellow of a Woodchuck will forever remain in the garden as an enemy that will never die. The Hunter is a cold-blooded killing monster, no longer a human being. In totalitarian societies there is always an enemy existing in the state for their shall always be an enemy from within the state to create a Society of Paranoia among the indoctrinated citizens under dominion of tyrants. The Society of Paranoia is to justify the horrors of the Tyrannical State. The imagery of Nazis exterminating Jews and Undesirables in Concentration Camps via noxious gas comes full-circle from the beginning to the end of the poem as the Hunter like the Fascist Vanguard have fallen prey to Hannah Arendt’s depiction of the ‘Banality of Evil’. The Banality of Horror is just following orders in aiding and abiding the evils of systematic horror. The underground means out-of-sight and out-of-mind to the indoctrinated citizenry who is none the wiser to the Tyrant’s System of Horror. 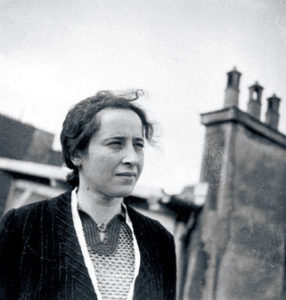 View all posts by aaronrziegler1337